As the month of June draws to a close, Bitcoin is continuing to trade within the $30K – $40K range for the fourth week in a row.

Justin Hartzman, Chief Executive of Canadian cryptocurrency trading platform, CoinSmart, told Finance Magnates that: “It’s no secret that the crypto market has more or less been moving along sluggishly.”

Indeed, BTC still does not seem to have enough momentum to make strong moves one way or the other. While BTC briefly dropped below $30K earlier this month, a move that many feared would lead to further drops, it quickly recovered to levels just over $30K.

“During this recent surge, the Bitcoin price managed to flip the 20-day simple moving average from resistance to support,” Hartzman explained. “This is crucial as the bulls have gained a strong support wall which could prevent a further fall.” 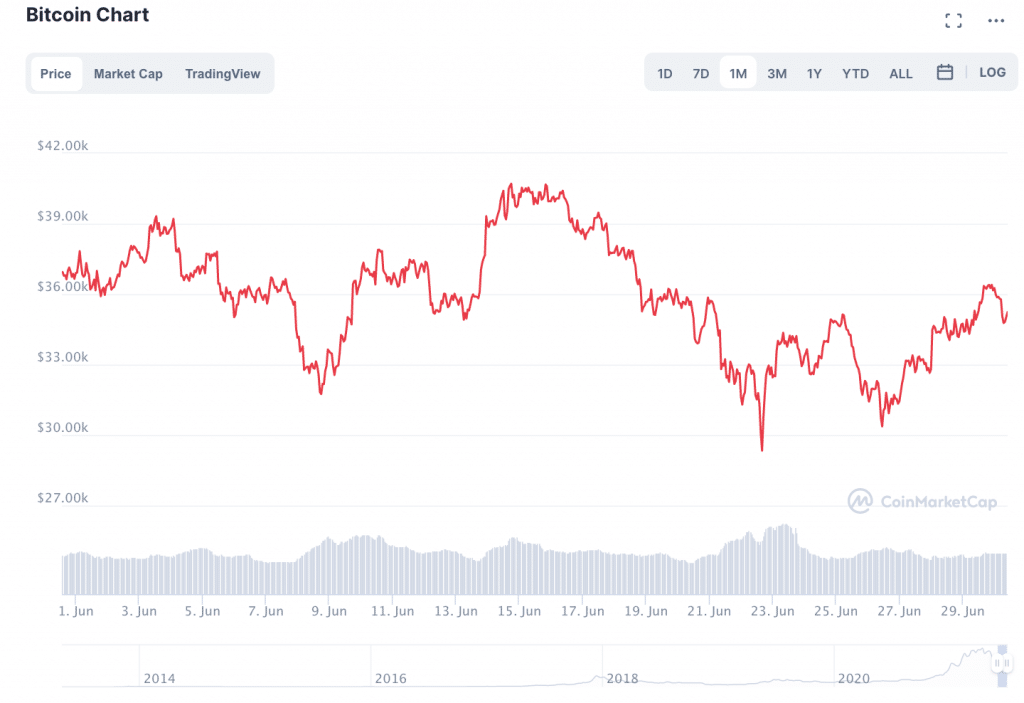 Was Bitcoin Oversold in May?

According to IntoTheBlock’s IOMAP metric, “around 1.65 million addresses had purchased ~850,000 BTC tokens at this level,” Hartzman explained. IOMAP, which stands for “Out of the Money Around Current Price,” identifies the ten most relevant clusters of investor positions at a range of +-15% of Bitcoin’s price at any given moment.

“It’s likely true that BTC’s price was overly-impacted by some negative news events in the past weeks.”

“If the buyers somehow flip this wall from resistance to support, $40,000 is definitely within reach,” he continued. “It depends on the appetite for long-term investors in further accumulation of BTC during this market phase.”

Doug Schwenk, Chairman of Digital Asset Research (DAR), added that Bitcoin’s price movement has “been very positive over the past couple of days, and could continue upward.”

“BTC trades largely on sentiment, and if that continues to be positive in the coming hours and days, we could easily see BTC trade above $40k. It’s likely true that BTC’s price was overly-impacted by some negative news events in the past weeks which has seen it trade lower than anticipated.” Indeed, the government of China has been cracking down on cryptocurrency mining, leading to some uncertainty in Bitcoin markets. However, some analysts believe that this crackdown will not hinder BTC’s growth in the long term.

Future generations will look at this time and it’ll be obvious that a decentralised monetary network at scale is more resilient than a nation state acting against it. https://t.co/8pTe4snjpZ

Of course, “It’s always at risk of falling further, especially as an asset that trades on sentiment and doesn’t yet have a strong economic use case.” However, BTC’s recent sell-off “has been perceived as over done, which likely brings buyers back into the market. Only time will tell if that view will turn into action.”

This prolonged period of relative stagnancy in the price of Bitcoin seems to reflect the possibility that much of the leverage that propped the Bitcoin price up earlier this year has been purged from the market.

Indeed, the elimination of leverage from Bitcoin was cited as the reason for BTC’s price crash in May. Over the course of the month, the price of BTC dropped from $58,000 to $34,000; at its lowest point, the price of Bitcoin was nearly $32K.

Tom Howard, Head of Business Development & Growth at PowerTrade, told Finance Magnates that: “Funding rates appear to have stabilized near zero or slightly negative, which indicates the overexposed bulls have rinsed out and bears are being cautious.”

“Realized volatility has fallen, indicating that over-leveraged positions have been closed out, and that market strength is building.”

Indeed, while leverage seems to have been the driving force that drove the price of Bitcoin to unprecedented heights earlier this year, the market structure was practically wiped away in an instant. A Bitcoin that is overly pumped by leverage has a house built on the sand. Now that leverage has been expelled, BTC may have a shot at building its house on the rock.

In the Short-Term, “De-Levered Markets Get Crushed”

American entrepreneur-turned-crypto enthusiast, Mark Cuban Tweeted about the effects of leveraged trading in the midst of the price drop: “De-Levered Markets get crushed,” he said.

“Doesn’t matter what the asset is. Stocks. Crypto. Debt. Houses. They bring forced liquidations and lower prices. But, crypto has the same problem that HFTs (high-frequency traders) bring to stocks, front-running is legal, as gas fees introduce latency that can be gamed That makes drops drop faster, and gains go up faster,” he said.

While the price drop seemed to foster negative opinions about Bitcoin related to short term price volatility, some analysts believe that the expulsion of leverage from the market is a positive thing for BTC over the long term. Hartzman said that: “this is a good thing, as some semblance of normalcy can now return to the market.”

“There was way too much leverage for market dynamics to remain sustainable over the long-term.”

“Altcoins Are Seeing a Surge That’s Not Necessarily Reflected in Bitcoin Dynamics.”

While Bitcoin may be moving sluggishly, altcoins are seeing much stronger price movements. “Bitcoin is the market leader so it definitely has a major impact on the price movement of altcoins,” Hartzman told Finance Magnates.

“Even so, altcoins are seeing a surge that’s not necessarily reflected in the bitcoin dynamics. There’s been renewed interest in DeFi and many investors are taking the low volatility in BTC prices to revisit the fundamentals of other promising crypto projects.”

Additionally, Schwenk told Finance Magnates that: “We see continued interest in a rotation from BTC into so-called altcoins.”

“Some buyers have been quicker to act on that interest and some are waiting. There is a strong narrative to altcoins as an alternative on several metrics including, ESG and fundamentals. We think, based on client feedback, that this trend will continue over the next year as Ethereum transitions to proof-of-stake and changes happen in the altcoin ecosystem.”

What are your thoughts on Bitcoin’s price movements and their effects on the altcoin market? Let us know in the comments below.