Crypterium plans to burn 30% or over 30 million of CRPT total token supply in the next 24 months. This deflationary technique could impact the price of CRPT in the long run.

Estonia-based Crypterim has announced its decision to speed up the burning rate of its platform token, CRPT. Despite the steady increase of CRPT’s burning rates, the crypto bank has decided to tweak its burning mechanism such that CRPT can be redeemed from the circulating supply and burned accordingly. This program kicks off in July. And as a deflationary technique, it is expected to impact the price of CRPT positively.

Before now, the burning process of CRPT solely depended on the transaction volume executed on the Crypterium ecosystem. For every transaction executed via Crypterium’s infrastructures, a 0.5% gas fee denominated in CRPT is charged and subsequently burned. Therefore, the burning rate of CRPT has closely trailed the business performance of Crypterium, which up until now has recorded an upward growth trajectory.

According to Crypterium, there was a 66% increase in the burning rate of CRPT in 2020, with over 400,000 tokens permanently removed from the total supply of the digital asset. Likewise, the token’s burning rate has experienced a remarkable increase in 2021, with over 800,000 CRPT burned in the first half of the year alone.

“Until now, our burning rate exclusively depended on transactions. However, looking ahead we’re planning to redeem tokens from the market for burning purposes. We are confident that increasing CRPT burning speed will have a positive impact on our ecosystem,” said Austin Kimm, COO at Crypterium.

Following the introduction of this alternative token burning technique, Crypterium welcomes active participation and contribution from the CRPT community. Interested CRPT holders can burn their tokens by transferring their preferred amount to a specified address. The startup added that this offer is valid until the 10th of July. 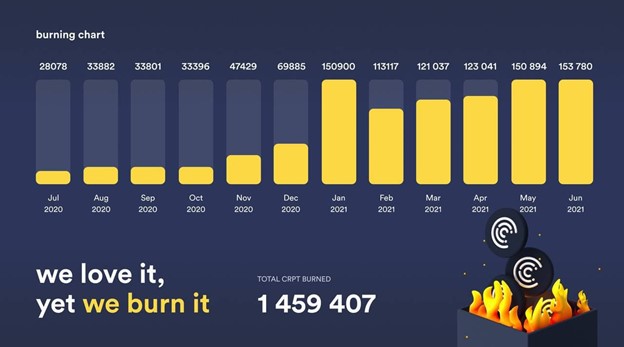 How Does This Impact CRPT?

Token burning is a deflationary system commonly used by crypto platforms with native digital assets. The goal is to periodically and permanently reduce the circulating supply of the tokens to ensure that the value maintains an upward trajectory. In the case of Crypterium, each transaction comes with a 0.5% CRYPT-denominated fee that is subsequently destroyed. By deciding to optimize its token burning mechanism, Crypterium looks to fast-track the impact of traditional supply-demand economics on the value of CRPT.

Notably, CRPT has a total supply of 98.6 million tokens. There are  83.6 million CRPT currently circulating in the market, of which 18 million are locked in the platform’s savings accounts presently. If all goes to plan, Crypterium would have burned around 30 million CRPT by 2023. In essence, over 30% of the current total supply could potentially vanish, leaving the ecosystem with a little over 50 million CRPT.

With the supply of CRPT projected to drop significantly in the next 2 years, there is a high tendency that the value of CRPT will appreciate in tandem with the market demand for the token. Ultimately, the business performance of Crypterium will, to a large extent, determine the effectiveness of this token-burning initiative.